Category: Diary Of A Village Builder 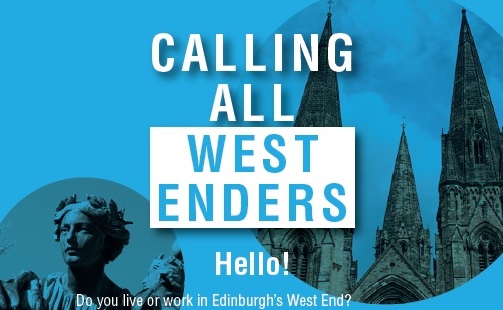 Hello there! My name is Mark McKergow, and I started Village In The City in June 2020 to improve my own life, and to help you improve your life too.  My experience in the COVID019 pandemic lockdown was of an immediate connection with neighbours in a new way.  In our street here in Edinburgh’s West End an email list and Whatsapp group sprang up with lots of people joining in, offering news and support and so on. We waved to each other on the doorstep during the NHS clapping. I even gave short saxophone performances (at the suggestion of our neighbours) on Sunday evenings and people came out to listen.

Many people told me that their experience was similar – contact in a new way, mutual support, recognition (even at a distance).  As the lockdown began to ease I found myself wondering about how to extend and build on this connection.  What is the next level up from a street?  A village! It seems to me that much more of our lives will be lived locally in the near future.  Many people are working from home. Getting on public transport involves risk. We have been exercising, walking, shopping locally. So how can we build more connection in our immediate areas? Build a Village In The City.

This is the first in a series of blogs where I will be sharing my own experiences of village building here in my own part of town.  I want to share the learnings, show how I am going about it (and working with others in the process) and show our growing collection of Village In The City tools in action.  The first few weeks have been very interesting… 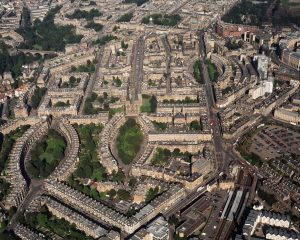 Edinburgh’s West End, where I live, is a very interesting place. It has been a commercial centre for many years, with beautiful and rather grand Georgian and Victorian terraces mainly used as offices for professional firms. In and around this, there have always been residential occupiers; Scots have been living in staired apartments for centuries, unlike our English neighbours. Recently there has been a trend to firms leaving for more modern office accommodation and their places being taken by residents. My own place is just like this – vacated in 2014, redeveloped and we arrived from ‘down South’ (England) in 2017.

Perhaps because of this commercial history, there didn’t seem to be much in the way of community activity among the residents, at least in our small patch. There are lovely little independent shops and cafes, many of which cater to office workers, and the place is well-known in the city.  So, my first activity was to scan the landscape to see what I could find – the motto being to ‘find what’s working’ and build on it.  I used the six elements of a Village In The City from the Manifesto to help me look around:

Having had an initial scan, I set out to connect with people who might be interested.  I join the Facebook group, bringing membership to 20, and make a cheery introduction. The admin, Paul, is clearly working hard with news of re-opening shops and other local developments.  I must follow up with him.

I also talk to a couple of local traders.  I have bought art from Paul (another Paul) from Gallery TEN, and happen upon him tidying up as the lockdown starts to loosen.  He is keen to get things moving, and tells me that a lot of the local footfall is driven by some smart hairdressers. People drive in, have a coffee, browse the shops, get some lunch… I also email Michael at Paper Tiger, who I met when I bought stuff at the start of lockdown which he delivered personally(!).  We meet socially distanced on a bench. He too sees the benefit of getting more community and connection with local residents.  It seems Paul the Facebook has also been in touch. We muse about how to reach out to people and he suggests a leaflet through every door. (Part of the art of village building is listening for good ideas!) 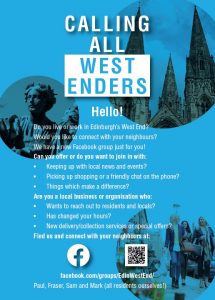 Having made a couple of contributions to the Facebook group I reach out to Paul the admin and we have a phone chat.  He is (hurrah!) very keen indeed to build the group and get more people involved. He is up for doing a leaflet too! He drafts some text and I get a graphic design friend to make it look attractive (see image). Paul arranges printing at a local copy shop (good to support local businesses!).  More people have been joining the group anyway, and we hope this will build things further.

Paul also starts putting posters on lamp-posts around the area.  He does this very carefully, noting the location of each one so we can retrieve them at a later date rather than leaving them to rot. Michael has offered to display a poster in Paper Tiger, and Roots deli/café are also keen.  This is a great way of connecting with both workers and residents.  I offer to do a share of the leafleting in my corner of the West End.

It seems to be working… the Facebook group has passed 200 members this week! Paul and Fraser are very active in running it, Fraser is working on a website to get the Facebook posts out to those who don’t use the platform, we have strict membership criteria (you have to live or work here). Many businesses are joining – they too can see the benefit of connecting with residents (who are here much of the time) as well as workers (who probably aren’t) and tourists (vanished).  This may require a careful eye – we don’t want the group becoming an advertising channel.

There are even more exciting developments appearing… I will bring more news as we go along. Watch out for the next instalment.  Sign up for information at

Mark McKergow is an 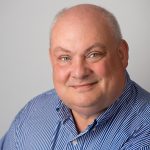 author, speaker and leadership development consultant based in Edinburgh’s West End.  He started the Village In The City project in June 2020.  Find out more about Mark’s other work at http://sfwork.com.